Road to the Big Screen

For more than fifteen years, Shorts International has proudly brought the Oscar® Nominated Short Films to the big screen.

Each nominee is released in one of three distinct feature-length compilations according to their category of nomination: Live Action, Animation or Documentary.

The films go into theaters shortly after nominations are announced and are then, a few days before the Oscars®, also made available via on-demand platforms, including iTunes, Amazon, Google Play and Vimeo on Demand. The theatrical release of the nominated short films each year is the world’s largest commercial release of short films on the planet, delighting audiences and giving filmmakers unprecedented opportunity to entertain short film fans.

If you are a filmmaker and have submitted your short film for Oscar® consideration, or are thinking of doing so in the future, then you have come to the right place.

This page is designed to give you the best sense possible of what you can expect from us as you head into what can only be described as a monumental experience!

In addition to being the distributor of the annual Oscar® Nominated Short Films theatrical release, we have the world’s largest catalogue of short movies and operate the world’s leading TV channel dedicated to shorts.

ShortsTV is available on Pay-TV platforms in the US, Europe and India, as well as across Latin America as TVCortos, reaching more than 100 million households. The channel offers the best short entertainment from around the world, as well as original programming that puts the spotlight on both emerging and established talent and brings audiences into the fast-paced world of short filmmaking. For a window into what ShortsTV and TVCortos have to offer, audiences can see our advertising-funded channels, Shorts and Cortos, on smart TV platforms such as Samsung TV Plus, Rakuten TV and LG Channels in selected markets. Find out where to watch us in your region here.

We’ve also launched the world’s first film app to use a similar machine-learning algorithm to Spotify, giving audiences the power to create their own movie channels based on their favourite genres and their mood. Plus, we distribute short movies to over 90 online stores, including iTunes, Amazon, and Google Play, and host regular film events and competitions aimed at honouring and advancing the careers of short filmmakers.

In short, our whole reason for being is short film. We are dedicated to bringing the world’s best short entertainment to audiences around the world and giving short filmmakers an unparalleled commercial medium to distribute their work.

The 3 key components of the release itself include:

To be eligible to win an Oscar® all movies must be available for theatrical release. In recent years, the Oscar® Nominated Short Films have been released in over 700 theaters across the US and Canada, garnering reviews in every major news outlet, from The Hollywood Reporter, Variety and Deadline to The New York Times and the Huffington Post. The films have also been released annually in a growing number of theaters around the world, including the UK, France, Germany, the Netherlands, Belgium, Spain, South Africa, Mexico, Chile, China and Australia among others, making it a truly international release.

The theatrical release is the single most important part of bringing your Oscar® Nominated Short Film to the world as it elevates your film in the media and allows viewers to enjoy your film the way it should be – on the big screen!

Starting just a few days before the Oscar® ceremony, the nominated films in the Live Action and Animation categories become available across cable and satellite pay-per-view services in the US and online download platforms around the world, including iTunes, Amazon, and Google Play.

ShortsTV is the world’s only TV channel dedicated to short movies and is available around the world. During this time, we dedicate our platforms to promote you, your film and your journey to the Oscars®. As a nominee, you will take part in several Oscar® related events, including the Nominee Luncheon and the Academy screening and cocktail reception, and ShortsTV will be there every step of the way.

Our dedicated press teams also work to get as much media coverage as possible, ensuring maximum awareness and commercial success for the release and your films.

Your life on the road to the big screen! 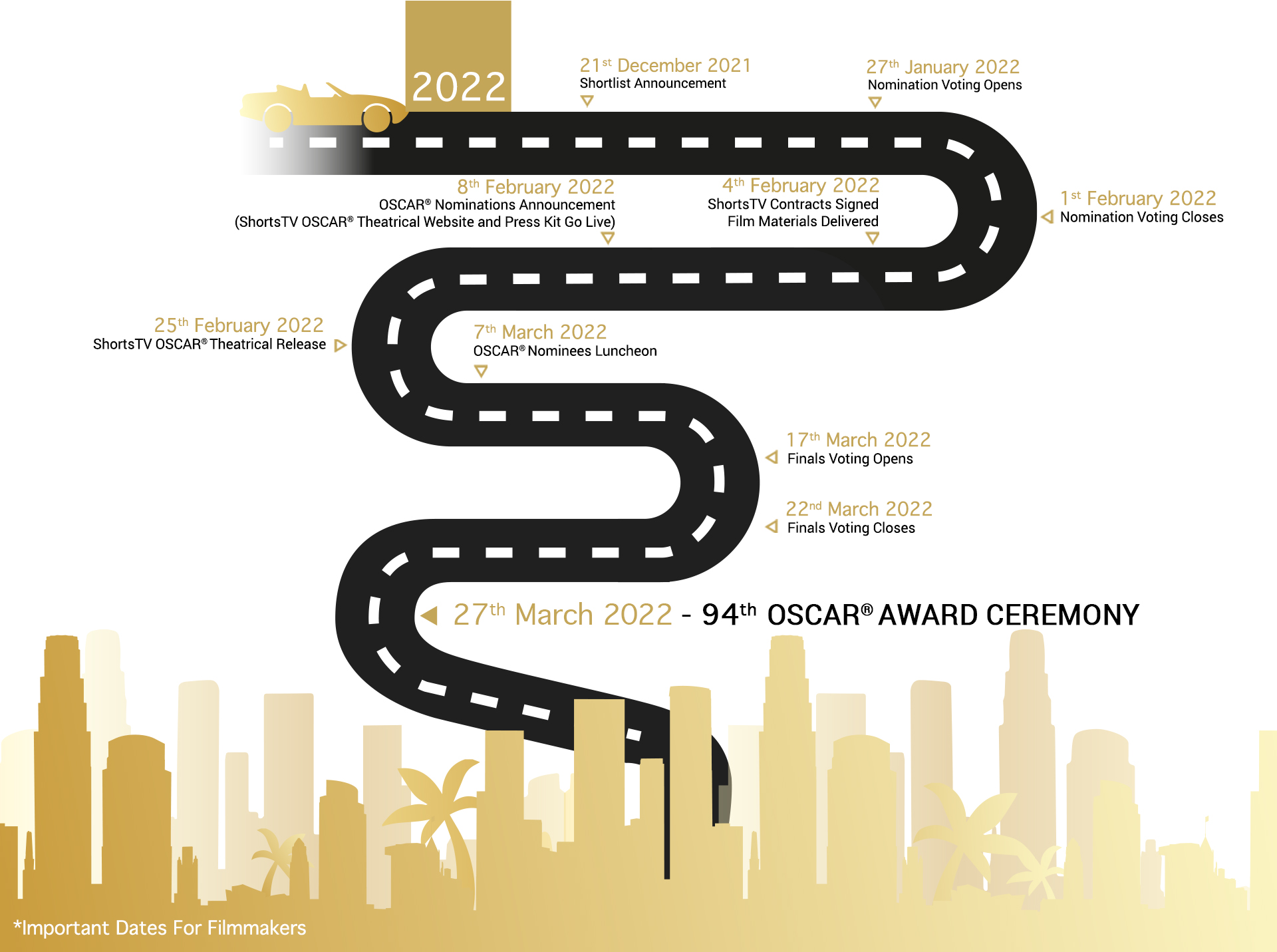 As a commercial operation with years of experience in the short film business, Shorts International is dedicated to making sure your film achieves the commercial success it deserves.

Our goal is to produce the most engaging release for our audiences within the best setting possible for each Oscar® nominated film, cost-effectively: We want audiences to be amazed by your film as much as we are, and we want to be sure that you make money while doing so.

Since the ONS come as fifteen different and unconnected short films, they must be programmed into three different theatrical presentations – one for the live-action nominees, one for the animated short nominees and a final one (or two, depending on length) for the documentary short films.

For each theatrical presentation, our team creates an integrated programming plan, an intro & outro, title cards for each film, interstitials, music, subtitles and any other elements needed.

For the animation portion of the release, in which the animated films usually take up less than the necessary 75-85 minutes of runtime, our team selects additional “Highly Commended” films that are felt to be of high enough quality and audience enjoyment to strongly support the release.

To keep the costs low, we keep the work of design, interstitial creation and any filming needed in-house or with trusted contractors who are familiar with the release as much as possible.

We get the finished feature-length anthologies into theaters across the US and Canada on a shorter timeline than other theatrical distributors ever believed possible. From the time that we know which films will be in the theatrical release until the time they’re actually in movie theaters is no more than two weeks!

PRODUCTION OF THE ONS RELEASE

In September and October, three months before the shortlisters are announced by the Academy, our production team starts work on the poster, graphics, music and interstitials for the coming year’s release.

Once the shortlisters are announced in late November/early December, we get in touch with each shortlisted film to pre-position as many of them as possible at the post-production house in New York City where the final release will be produced once the nominations are announced.

Getting contracts signed for the release is critical at this stage, as the final master can’t leave post-production without all contracts in place. Any contracts not signed at this point may cause a film to be dropped from the release.

DISTRIBUTION OF THE ONS RELEASE

We start planning our US and Canadian release plan months in advance.

“Coming Soon” trailers go into theaters in the US at Christmas, and theater bookings are often well-underway by then.

The theatrical run then lasts until a few weeks after the actual Oscar® Ceremony.

Primary interest outside the US/Canada is for the Live-Action & Animated portions of the release. We work closely with theaters, in-country theatrical distributors and film festivals in countries around the world, including the UK, Netherlands, Belgium, France, Germany, Italy, Spain, Australia, Mexico, Chile and South Africa, as well as individual or festival screenings in many other countries.

We have worked closely with movie theaters that screen the films to create a window for online commercial exploitation at the very tail-end of the theatrical run. But in return, we have promised to ensure the films are not available in other media (digital, TV, etc) from the time of nomination until the week before the Oscar® ceremony.

On the Tuesday before the Oscar® Telecast we release the digital compilation of the ONS across VOD and EST sales platforms. The release is carried as a pay-per-view/VOD asset by all major cable and satellite carriers in the US and some in Europe. It is also carried for sale in online stores such as iTunes, Amazon, Google, Verizon, Vimeo and others.

What do theaters pay?

How do we maximize the nominated filmmakers’ financial returns?

When do theaters pay and when do you get paid?

Who verifies the theatrical film statements?

The internet allows filmmakers a chance to showcase their films and provides great exposure and awareness, but once a film has been shortlisted it is very important for the success of the release that the films be taken down for the duration of the OSCAR® season.

Placing films on the Internet for free during that time (short list announcements through to The OSCARS®) will have a significant impact on the release. Audiences simply aren’t interested in paying to see films in theaters that they can find for free while sitting at their desk or riding home on their commute….thus leading to potential cancellation of the entire release.

This small internet hiatus window allows the films (and audiences) to enjoy these incredible films in theaters prior to the The OSCARS®, in that magical theatrical environment every movie wants to call “home”.