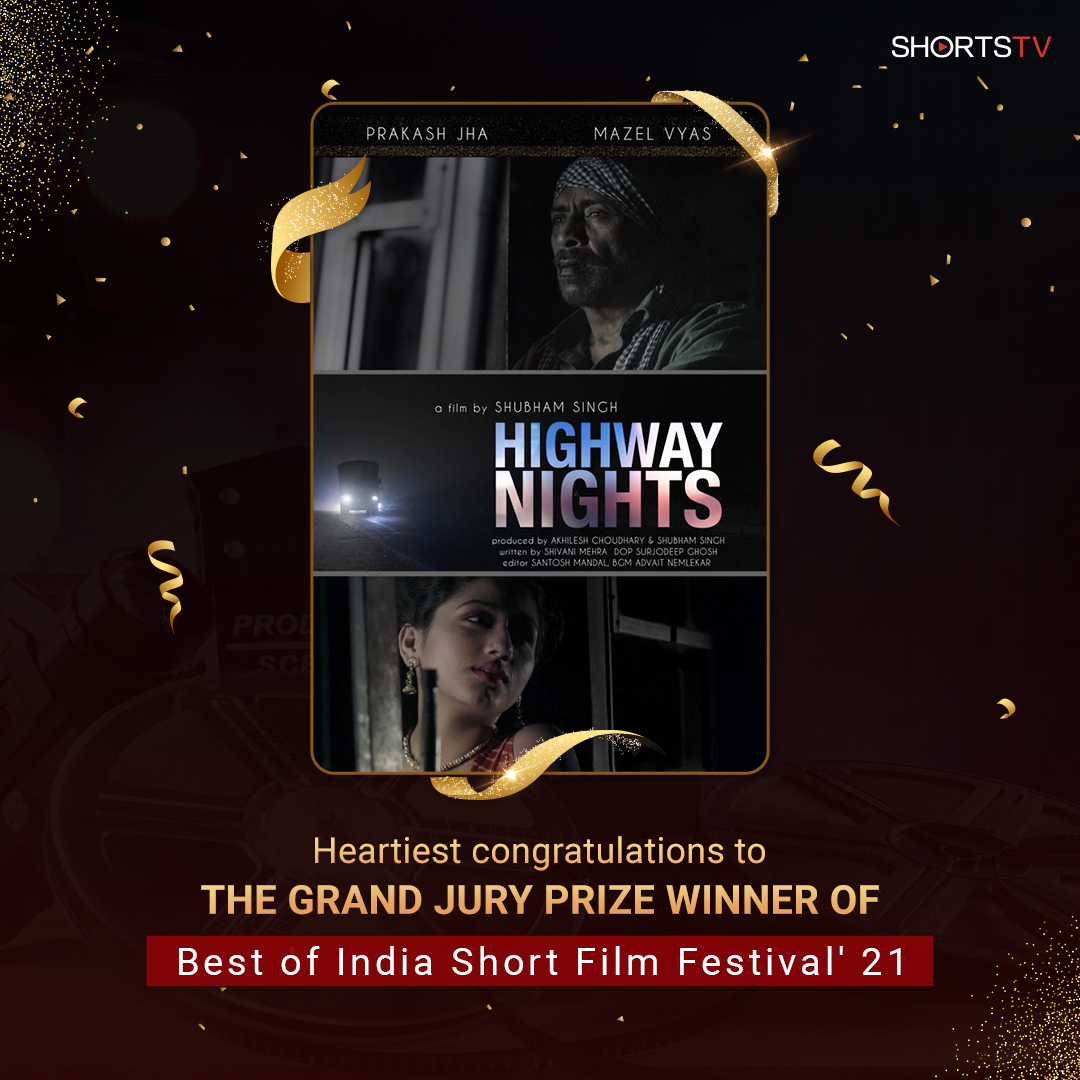 ShortsTV, the world’s first 24/7 channel dedicated to short films, announces the Grand Jury Prize Winner and top 5 semi-finalists of ShortsTV Best of India Short Film Festival, from over 2400+ entries received this year. The grand jury prize winner for this edition is Highway Nights, which features Director Prakash Jha as the lead in the film, Directed by Shubham Singh and Produced by Akhilesh Choudhary. The other selected top 4 short films across genres explore the contemporary themes in society that are delivered through stellar performances of some of Bollywood’s most popular talent including Mazel Vyas, Ahsaas Channa, Neena Kulkarni, among others.

The top 5 short films will be exclusively aired on ShortsTV on 14th to 17th Oct, 8 PM Onwards. The films will receive a theatrical release in Hollywood – Los Angeles, USA, which qualifies them for 2023 Oscar® consideration. The winning film Highway Night received prize worth $2,500 and eligibility for a television broadcast deal on ShortsTV.
Launched in 2018, the ShortsTV Best of India Short Film Festival aims to recognize and elevate exceptional work of some of the most creative short film makers in India, giving them a global platform to showcase their work and opening up new opportunities, including Oscar® consideration.
Congratulating the finalists, Carter Pilcher, Chief Executive, ShortsTV said, “India has a wealth of creative storytellers! What fun to see once again this year the huge number of aspiring filmmakers entering the ShortsTV Best of India Short Film Festival from all corners of the country. These amazing entries deserve recognition. What a pleasure to showcase the most compelling films for our subscribers – they will love every minute!

Sharing his thoughts on the growing success of the Festival, Tarun Sawhney, President – Asia, ShortsTV & Festival Director said, “Short format content has seen an exponential boom in India in the recent years with some of the most distinguished stories being woven into powerful short films that deserve global recognition. With the ShortsTV Best of India Short Film Festival, we aim to recognise the innate talent of Indian filmmakers and are very proud of the steady growth in the number of entries we have received over the years since its inception in 2018. We are truly elated at bringing forward another set of beautiful short films that are a work of art.”
The previous edition saw participation from Bollywood’s leading actresses and directors including Vidya Balan, Soha Ali Khan, Sayani Gupta, Ronnie Screwvala, among others. Over the course of previous three editions, the festival has seen a rise in submission of regional language short films in Bengali, Tamil, Malayalam, Marathi, and Telugu, that have been bringing forth socially relevant story plots delivered via creative storytelling.

The top 5 finalists include:

1. Highway Nights
Director Prakash Jha as the lead in the film, Directed by Shubham Singh and Produced by Akhilesh Choudhary alongwith Shubham Singh
Highway Nights is to story of an ageing, overworked lorry driver who gives a lift to a young, chatty sex worker one night. As the two characters head towards the final stop, the film unpacks its layers gradually, allowing the viewer an uplifting, hopeful message that rests patiently within its conclusion.

2. Itwaar
Starring Kumud Mishra and Lubna Salim, Directed by Rahul Srivastava and Produced by Prateek Chakravorty
Itwaar is the story of a father who relocates to support his son’s studies. Cynicism turns him into a hypochondriac impacting his mental health and family ties. Will things change?

3. The Case
Starring Neha Mahajan, Directed by Arun Varghese and Produced by Priyanka Murmu, Nishant Gala, Neha Mahajan, Arun Vaghese & Carroll Chiramel
The Case is about a lawyer who questions another woman’s decision with her own dilemma that threatens to take her world apart. The short film also received nomination for Social World Film Festival 2021.

4. The Last Rights
Starring Kanupriya Sharma, Directed by Aastha Verma and Produced by Anil Kumar along with Aastha Verma
The Last Rights won the Best Short Film Award at Wildsound Feedback Writing and Film Festival. The short film narrates the story of a young Indian woman who challenges her society’s patriarchal traditions in order to give her deceased grandmother her last rite.

5. Dafan
Featuring Ahsaas Channa and Neena Kulkarni, Directed by Adeeb Rais and Produced by MadMidaas Films
Dafan won the Cult Critic Movie Awards in Outstanding Achievement Award category. It is a powerful coming of age story about class divide, labour issues, truth and humanity. Can one incident change the way our morals lead our professional life? Has the need to succeed taken over our ability to adjudge right from wrong?
The winner of the 2020 edition was ‘Natkhat’ featuring leading Bollywood actress Vidya Balan, co-produced by Vidya Balan & Ronnie Screwvala and written by Shaan Vyas & Annukampa Harsh. Subscribers can watch and enjoy the previous years shortlisted and winning short films such as Shunyata, Trapped, Wolf of Chawl Street, etc on ShortsTV.

ShortsTV is available on Tata Sky ShortsTV, Airtel ShortsTV and ShortsTV Active on DishTV & d2h. It is also available on Amazon Prime Video & Airtel Xstream App. For more updates keep up with ShortsTV social channels by following us on Instagram and Facebook